“I have no data yet. It is a capital mistake to theorize before one has data. Insensibly one begins to twist facts to suit theories instead of theories to suit facts.”  ~Sherlock Holmes.

Examples of positive herb-drug interactions include:

I have been in practice for nearly thirty years, intelligently and safely combining comprehensive herbal formulations with hundreds of different drugs for all kinds of conditions and diseases. Based on my clinical experience and my ongoing comprehensive and careful review of scientific literature, my opinion is that the extreme warnings and cautionary articles published by both the media and various medical institutions is for the most part based on unsubstantiated theories and misinformation about plants and their physiological effects.

Certainly, we should proceed with caution and common sense, carefully reviewing scientific studies before we prescribe herbs and herbal formulas in tandem with drugs. There are definitely cases of proven herb-drug interactions. However, there are few people with significant experience—much less expertise—in this specialized area of medicine. Consequently, both the public and health professionals in search of guidance are often convinced that all herbs should be strictly avoided. This approach is based on unwarranted concerns deduced from negative reports and a lack of understanding about the physiological effects of plants. This is also the primary reason why doctors neglect to discuss this issue with their patients, the majority of whom are already taking herbal supplements. Meanwhile, many patients are taking multiple drugs simultaneously. The safety data on drug-drug interactions is severely lacking, and this, I believe, is a much greater risk.

A Case of Misplaced Worry

Something that I have always found incongruous is the exaggerated worry over herb-drug interactions, but the apparent lack of concern about drug-to-drug interactions. Here’s a common scenario: Most people have more than one doctor, often including several specialists. It’s not unusual for one doctor to precribe one or more drugs for a patient, with other doctors prescribing additional drugs for other conditions, or to treat the side effects of the drugs. There is little to no research on the effects of patients taking a multitude of drugs. Bear in mind that in general, herbs are much safer than drugs and do not function like drugs. That being said, it is important that patients be under the care of an expert in natural medicine and should not self-prescribe or take supplements that are not professional-grade and verified for quality, purity and potency. 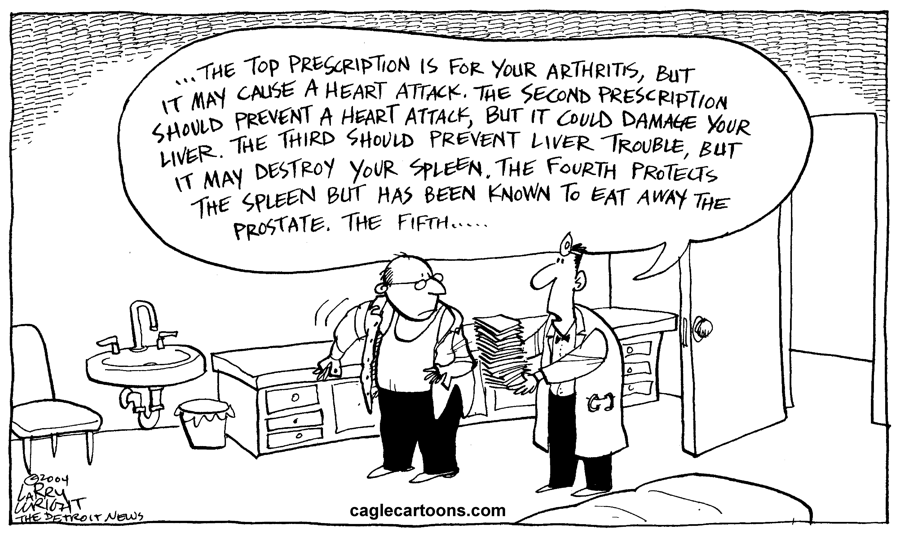 Another concern about pharmaceutical drugs is their effect on the environment. With so many people taking and excreting drugs, drinking water in many places is now contaminated with low levels of pharmaceuticals. In an investigation by the Associated Press, drinking water supplies in 24 major metropolitan areas were found to include drugs—including antibiotics, hormones, mood stabilizers, and other drugs.1

Conventional doctors often recommend that patients avoid herbs, particularly if they are undergoing treatment for cancer. This is highly unfortunate, because herbs have a great deal to offer in a comprehensive plan for maintaining health and effectively managing cancer. Doctors routinely advise patients to avoid herbs prior to surgery because they are ‘blood thinners’—assuming that the herbs act like coumadin or aspirin. In reality, many herbs, such as yarrow (Achillea millefolium), are blood moving, discourage ‘abnormal’ blood clots/thrombosis, yet are able to improve blood coagulation when needed, such as wound healing. This is just one example of the many erroneous theories that are accepted with no concrete data to back them up.

The focus of my practice is to help improve health, which encompasses much more than simply the eradication of illness. With this goal in mind, and using the assessment tools of the Eclectic Triphasic Medical System (ETMS), I provide protocols that routinely incorporate several herbal formulas, often in tandem with drugs. In three decades of practice, I have found that integrating an herbal protocol into a treatment plan does not diminish the efficacy of drugs, nor does it increase toxicity. Instead, the results show that the herbal protocol improves effectiveness, which often means patients are able to take a lower dosage of pharmaceutical drugs.

In brief, the cytochrome P4503A (CYP3A) subfamily is largely found in hepatocytes, with some presence in the intestine. Together with the transport protein P-glycoprotein (PGP) present in the small intestine, these two systems regulate the metabolism of drugs and nutrients. Many foods, food components, and botanical supplements interact with the CYP3A and PGP metabolism, but even more importantly, genotypic variability plays a significant role in how well one metabolizes and detoxifies various drugs. The effects of herbs on CYP3A and PGP is dose sensitive, suggesting that high doses of herbs are required to modulate CYP and PGP activities.

One problem in discovering the truth about potential HDI’s is that much of the published research is either in vitro, perfomed on animal models, done with isolates (not whole herbs), and/or based on high dosages of these compounds. As a result, there are many theoretical herb-drug interactions that have never been observed clinically. An additional issue is that basing interaction data solely on P450 3A and PGP may not provide the most accurate model of HDI’s. The pertinent clinical question is, “Does a particular herb either cause a select drug to be less effective or increase its toxicity?” Until high quality human data is available, extrapolations made from in vitro models using supra-physiological concentrations of isolated constituents, and animal models using unrealistic dosing, may lead to misleading understandings of the potential of HDI’s.

The Positive Effects of Herb-Drug Interactions

Botanicals naturally have a multi-faceted nature, which makes them eminently suitable for addressing the wide range of issues associated with complex diseases such as cancer. In my practice, I’ve observed that the synergestic actions of herbs can even help to buffer the effects of conventional chemotherapeutic drugs.

Current research supports my long-held observation that the marriage of herbs and conventional drugs can be successful and beneficial. A recent evaluation of herb-drug interactions and research published in The Journal of Alternative and Complementary Medicine  revealed a positive outcome that will hopefully help to shift awareness within the medical profession. In their evaluation of 17 studies conducted worldwide on HDI-induced pharmacodynamic interactions, the researchers concluded that:

The Role of Herbal Medicine in Cancer Therapies

Herbal medicine has been the foundation of treatment for human maladies since ancient times, and continues to be an essential part of culturally based healing traditions in many cultures worldwide. As our respect for botanical medicine has grown, numerous herbs, including those traditionally used in Chinese medicine, are being incorporated as remedies for disease management and treatment in Western countries.3

Because botanicals contain a variety of organic chemical complexes, they usually act on multiple targets. I consider this to be a significant benefit—for example, a potential advantage of phytochemicals is that they may act through multiple pathways and thus, reduce the development of resistance by cancer cells.6

Botanicals are the main “players” or core components in the ETMS approach to health, which takes into consideration the entire mileu of the individual within their environment. It is a more complex task for the physician to prescribe and monitor botanicals in tandem with drugs—no question about it. But being able to confidently assess the risk-to-benefit and safely incorporate botanicals allows for a more elegant, comprehensive, and ultimately successful approach to healing and medicine.

4 Replies to “The Truth about Herb-Drug Interactions: An Honest Evaluation of the Benefits and Risks When Weighing Scientific Data and Clinical Experience”