At the Mederi Centre for Natural Healing, the foundation of our healing approach is rooted in traditional medical philosophies and practices, infused by the latest modern scientific research. Over the past twenty-five years, I’ve combined these complimentary modalities into a unique healing protocol that I call the Eclectic Triphasic Medical System (ETMS).

Enhancing vitality—what I think of as the Vital Force—is central to all healing. The Vital Force is the principle force that is innate to all living things. It is the governing intelligence essential to 1) Energy, 2) Adaptation, and 3) Protection.

Like everything in the Universe, the Vital Force is composed of two complimentary opposites within the whole. Traditional Chinese Medicine refers to these opposites as yin and yang. These two energetic currents oppose and at the same time balance each other, with one inward-anabolic (yin-like) and the other outward-catabolic (yang-like). They have very different qualities, and yet both are necessary for health and healing. Inward-anabolic expresses as nurturing, rebuilding, and restorative activities, while outward-catabolic expresses as active, using-up activities.

Vitality is dependent on the appropriate balance between ‘input’ and ‘output’ of energy in every area of life, including physical, mental, emotional, and spiritual.

For each individual, one of these elements will manifest more strongly than the other as a result of innate constitution and lifestyle choices and habits. To restore balance and facilitate healing, both inward and outward supporting remedies must be used. Botanicals can support anabolic or catabolic energy, and some botanicals support both.

Under conditions of prolonged stress, the Vital Force adapts to the situation by directing an output of energy, putting the organism into a state of allostatic load, whereby less input energy is available. This costs the organism to the degree that it weakens the Vital Force and creates inward-anabolic deficiency. Botanical and nutritional medicine together with dietary modifications, rest and proper sleep is essential to restoring the Vital Force as a whole, and particularly the inward-anabolic energetic current.

To be efficient means to be effective while producing the least amount of waste. Efficiency primarily relates to absorption, utilization, transportation, reception, and disposal at the cellular, tissue, and organ level.

The actions and effects of the ETMS tools on the human organism (Vital Force) can be broken down into four categories, which I refer to as the 4 R’s: 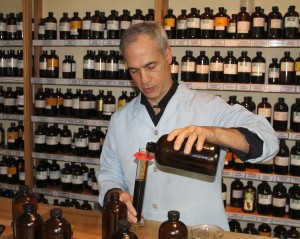 Stagnation is a common characteristic of cancer and other degenerative diseases, and most often manifests as blood, lymph, oxygen, and energy stagnation. A common feature of cancer is hypercoagulation (blood stasis), hypoxia (oxygen stagnation), immune-lymphatic system stagnation (down-regulation of cancer fighting cells) and organ system stagnation, including the liver and kidneys. Increasing “flow” is essential, and is achieved through the actions of stimulating, relaxing, and warming.

Cancer patients (and others with degenerative diseases) often have nutritional deficiencies that hinder their ability to be well, heal, respond and attack the disease.  Cancer as an energetic force has the ability to alter nutrition for survival, growth, and invasion. Excesses must be considered as well as deficiencies; for example, an excess of iron and copper can assist cancer growth and enable the cancer to protect itself.

Removal of toxins by up-regulation of the immune-lymphatic system, organs, tissues, and cells is an essential objective of the ETMS toolbox.

Altering the terrain to make it the least conducive for disease and the most conducive for health is the goal of the ETMS toolbox. In the case of cancer, the pleiotropic (multitasking) activities of many of the botanical and nutritional agents also directly target the cancer by influencing multiple signaling pathways, including survival pathways such as those regulated by NF-kappa B, Akt, and growth factors; cytoprotective pathways; and metastatic and angiogenic pathways, including MMPs. These compounds are often cell-behavior and redox-regulating and act on healthy cells as free radical scavenger and hydrogen donors, exhibiting both pro- and anti-oxidant activity. They can selectively act as pro-oxidants on cancer cells that need to undergo apoptosis, and can bind and chelate metals, particularly iron and copper. In addition, these compounds can protect against drug toxicity, yet potentiate the antitumor effect of chemotherapy and targeted drug therapies. Finally, some of the compounds can act as mild chemotherapeutics—many of these plant extracts are the source of chemotherapeutic drugs.

The ETMS is a comprehensive approach to healing that successfully integrates traditional, wholistic medicine with modern, allopathic medicine–thus creating a custom-tailored approach for each individual based on scientific research and logic as well as a healthy dose of common sense and the essential aspect of intuitive wisdom.

One Reply to “The ETMS Toolbox”

“The beauty of nature inspires the heart, to pursue the nature of beauty.” - Lawrence Stoller