I’m often asked what I consider to be the healthiest diet. Through decades of nutritional research and experimentation, I’m convinced that a diet of primarily organic, plant-based Mediterranean foods—including whole grains, fruits, vegetables, nuts, legumes, eggs, dairy products (cow, goat and sheep milk derived) and healthy fats (mostly olive oil), with fish and seafood playing a key role as a main protein source—is by far the best diet for long term health. The term “pesca-flexa-vegetarian” comes closest to describing the diet that my family and I eat.

Many people today define their diet based on what they don’t eat: “gluten-free,” “low-carb,” or “low-fat” are among the most popular regimens. But I believe we create healthier eating habits if we focus on what we do eat, rather than on what we don’t eat. For instance, it’s possible to be a vegetarian or pescatarian while eating a diet that’s very unhealthy, full of processed starches and sugars, junk foods and fish sticks, instead of a healthier diet based on whole foods.

I believe people have more misconceptions about food than perhaps anything else related to health. These misconceptions lead to dietary fads that are often needlessly restrictive, unbalanced, and even detrimental. When I ask people where they get their information, the most common answer I receive is, “I read it on the internet.”  The internet is a wonderful resource, and it can also be dangerously misleading. The simple truth is that the internet is not a reliable source for factual information.

Dietary fads are not based on good science. For example, I commonly hear, “I am on a grain-free diet because grains make you fat and cause dementia.” The truth is that whole grains are highly nutritious and have the least carbon footprint of any food group. Based on meta-analysis research studies, eating whole grains is associated with healthy weight, reduced chronic disease, and lower mortality.

The Many Health Benefits of Whole Grains

Research shows that whole grains are positively correlated with increased lifespan. Two recent studies1 examined data from millions of people in more than four dozen different studies, and found evidence showing those who eat the most whole grains have a number of reduced health risks compared to those eating the least, including:

Why I Choose a Pescatarian Diet

I’ve long been intrigued by the relationship of diet and health, and have studied nutrition extensively for forty years, beginning in 1977 when I worked in a natural food store in Stamford, CT. It was also in 1977 when I had my last bite of meat, much to the consternation of my Italian mother, who didn’t understand my desire to explore different ways of eating. In the ensuing years, I’ve experimented with veganism, a 100% raw foods diet, and lacto-ovo vegetarianism.

I’ve settled on a “pesca-flexi-vegetarian” diet, which expands on a broad based lacto-ovo vegetarian diet to include fish, which I enjoy almost daily. This diet most closely resembles a traditional Mediterranean diet, which research shows—and I’m convinced—is the most healthful diet. Just to be clear, I have no problem with people eating meat on occasion. In many traditional cultures, meat was enjoyed as a celebratory food, such as a “feast” to honor a special day or occasion.

There are several reasons why I choose to include fish and seafood in my diet:

We know that eating fish is good for you. In fact, fish, along with many fruits, vegetables, legumes and whole grains, are some of the ultimate “healthy aging” and “health-promoting” super-foods.

Fish in general—and fresh sardines and anchovies, in particular—play an important role in the diets of many peoples known for their longevity, including the inhabitants of the Greek islands of Crete and Icaria, as well as Sardinia, an island off the coast of Italy. There are many proven benefits to plant-based diets, including a lower risk of obesity and chronic diseases like heart disease and diabetes as well as cancer. 7-12

Raising livestock comes at a high environmental cost. According to the United Nations, raising livestock contributes to 15% of all human-made carbon emissions.  In contrast, producing fish and seafood has a lower carbon footprint than producing any type of animal meat or cheese.

Fish is the best dietary source of vitamin D, which many people are deficient in. Studies show that pescatarians tend to have higher levels of vitamin D than vegetarians.14

Omega-fatty acids from fish have been shown to:

The Healthiest Fish to Eat

Pacific Northwest salmon is one of the best of all fish to eat. Besides being a good source of protein, particularly the muscle building amino acid “proline,” salmon is an excellent source of omega-3 fatty acids and vitamin D. Salmon is also rich in astaxanthin, a unique and important carotenoid responsible for the pink/orange color of salmon (as well as trout and shrimp). Astaxanthin is a carotenoid that does not convert to vitamin A and is a powerful “redox-antioxidant,” acting as a potent oxygen enhancer and single oxygen quencher protecting against free radical damage. I suggest consuming only wild caught salmon from the Pacific Northwest or Alaska.

A caution about eating fish—consuming the wrong kinds of fish too often can increase the level of mercury stored in your body. It’s important to be aware of the best (lowest in mercury) fish to eat, as well as the amounts that are safe to consume. I advise everyone to avoid fish known to contain high amounts of mercury, especially pregnant women and nursing mothers, because mercury can cause neurological damage to a fetus or newborn. Young children and pregnant or nursing women should only consume fish with the lowest mercury content. The chart below is a helpful guide: 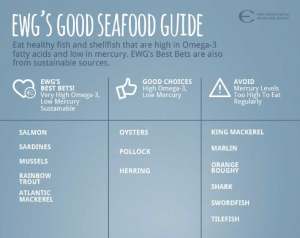 Lessons From the Blue Zones: Beyond Diet

I’m firmly convinced that a pesca-flexi-tarian diet is the most well rounded, satisfying, and health-promoting diet that we can eat, and there’s plenty of research to support this.15 But while diet is a cornerstone of a healthy lifestyle, there are many other factors that are also necessary for a healthy and satisfying life.

Since the 1990s, researchers have been studying areas in the world where people routinely enjoy long life spans. Scientists have deemed these special areas as “Blue Zones.” Here are nine lessons on healthy living from the Blue Zones: