When someone is confronted with a diagnosis of cancer, in the vast majority of cases doctors recommend surgery — often, as quickly as possible. The goal is to remove the cancer, with the hope that the person can go on to live a normal, cancer-free life. But unfortunately, the reality is often otherwise. For far too many people, cancer recurs; either at the primary site, or the cancer metastasizes, arising at sites distant from where the cancer originated, often in life-threatening areas, such as the lung, liver, brain, or bone.

Many of the patients that find their way to me have been through the heart-breaking trial of believing that surgery would cure them, only to have cancer reappear months or years later. My twenty-five years of experience with cancer has shown me that contrary to the generally accepted treatment modality, surgery can actually encourage the return or spread of cancer. In cancers of a more benign nature, such as a slow-growing basal cell skin cancer, or a breast tumor with a full pathology of nothing but favorable markers, surgery is almost always effective, and does provide a “cure.” But in the case of more aggressive and intelligent cancers, such as renal or pancreatic tumors, surgery causes an environmental change that feeds the cancer. When this happens, the cancer not only returns, but also metastasizes and behaves more aggressively. It’s important to note that less invasive forms of surgery may not create the same problems.

There are several reasons why surgery promotes the growth and spread of cancer. Surgery inevitably causes cellular damage and inflammation, triggers the need for increased growth factors to heal from the assault of surgery, and weakens the life force. The body responds by up-regulating growth factors, such as VEGF, and inflammatory pathways, such as COX-2 and LOX-5, which are essential for healing. But this also provides cancer cells with exactly what they need to spread and multiply. The process of angiogenesis, which is part of the body’s innate healing activity, is the very same process that nourishes cancer. In addition, surgery causes mutations of important cancer-suppressor genes, most notably the nm23 gene. Research shows that the primary tumor has been shown to suppress angiogenesis in its distant metastasis. And although it’s not often taken into consideration, surgery weakens the vitality of the patient. The energy, or life force, required to heal from surgery is the same energy that is needed to control and suppress cancer. 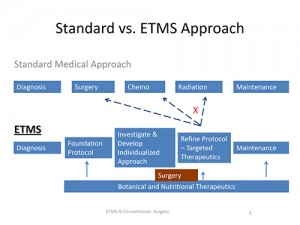 This is not to say that I am opposed to surgery. I believe that there is a place for surgery in treating some cancers, but there must first be a comprehensive plan developed for the most beneficial outcome. An effective treatment plan consists of a systemic protocol that targets the health of the individual, the specific nature of the cancer, and is based upon natural compounds that suppress angiogenesis while simultaneously promoting healing. These compounds include adaptogens such as Panax ginseng, which have the ability to promote healing, build vitality, inhibit cancer growth, and suppress cancer-related angiogenesis simultaneously. Other natural compounds that promote healing include anabolic nutrients, immune-modulators, and enzymes.

Within the ETMS approach the timing of surgery is critical. The goal is to strengthen the “host,” optimize the “terrain,” and target the cancer, which may include specific individualized drug therapies. There are three primary reasons for implementing a comprehensive ETMS program before undergoing surgery: 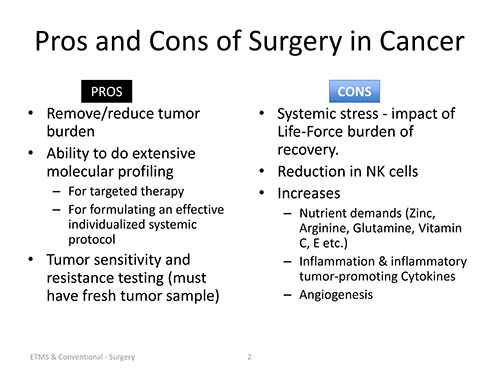 Evidence is beginning to find its way into the forefront of modern research that surgery is not a curative treatment for systemic cancer and that many natural compounds target cancer stem cells, as well as promote healing. Removing a tumor through resection is an aggressive and invasive action, and one that should be carefully considered when facing an already hostile, unstable internal environment. Until the allopathic medical model is fully aware of the detrimental effects of using emergency treatment approaches for addressing chronic conditions, we will be unsuccessful at treating and curing our most deadly diseases.

Surgery has it place in cancer treatment, but it needs to be used wisely and with a greater understanding of the cost-to-benefit ratio; in addition, as mentioned previously, timing must be carefully considered. I believe surgery should be preserved as later treatment rather than as a first-line treatment as it is presently used, unless the situation is truly an emergency and must be performed to save a person’s life. Whenever possible, immunonutrition and botanical medicine needs to be applied at least one week (and preferably, weeks or months) prior to surgery. If one has been successful with a balanced, systemic treatment plan, results such as tumor shrinkage and a noticeable improvement in energy and overall health (as measured by lab tests) will be apparent. In this case, surgery, if necessary, can be successfully performed without the risk of generating an environment that will promote metastases.

16 Replies to “Does Surgery Spread Cancer?”