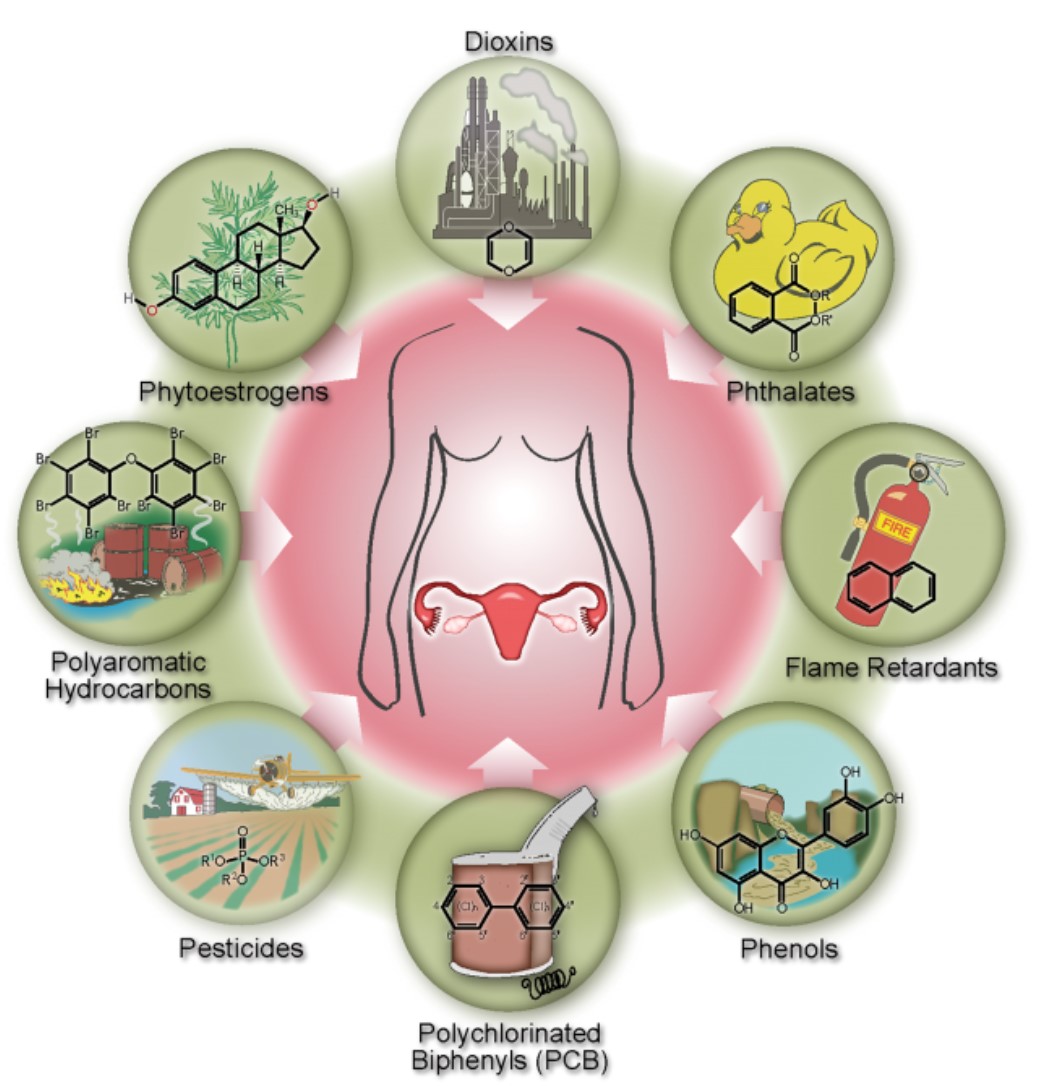 Almost daily, we are warned of the dangers of exposure to toxins from pollutants in our air, water, food, home, and workplace. The reality of modern life is that no matter how careful we may be, we are inevitably exposed to a variety of toxins. For many people, knowing that toxins are linked to cancer, cardiovascular, neurological, and other diseases creates a great deal of anxiety.

What most people don’t realize is that virtually any substance can be toxic—even pure water. We’re constantly encouraged to drink plenty of water, but drinking too much water in a short period of time can cause hyponatremia (basically, water intoxication). In severe cases, water intoxication can lead to seizures, coma, and even death.

The example of water as a potential toxin makes it obvious that not all potential toxins are toxic at any level. And it raises the question: Should we take extreme measures to aggressively detoxify and rid our bodies of substances deemed toxic?

The reality is that it is impossible to avoid toxins in our modern world (and in truth, there have always been toxic substances in our environment). A vast industry has arisen that plays into the fear and misunderstanding of toxins. Many companies promote products that claim heavy duty “cleansing” of our organ systems, encouraging extreme approaches that can actually cause more harm to the body than the exposure itself. 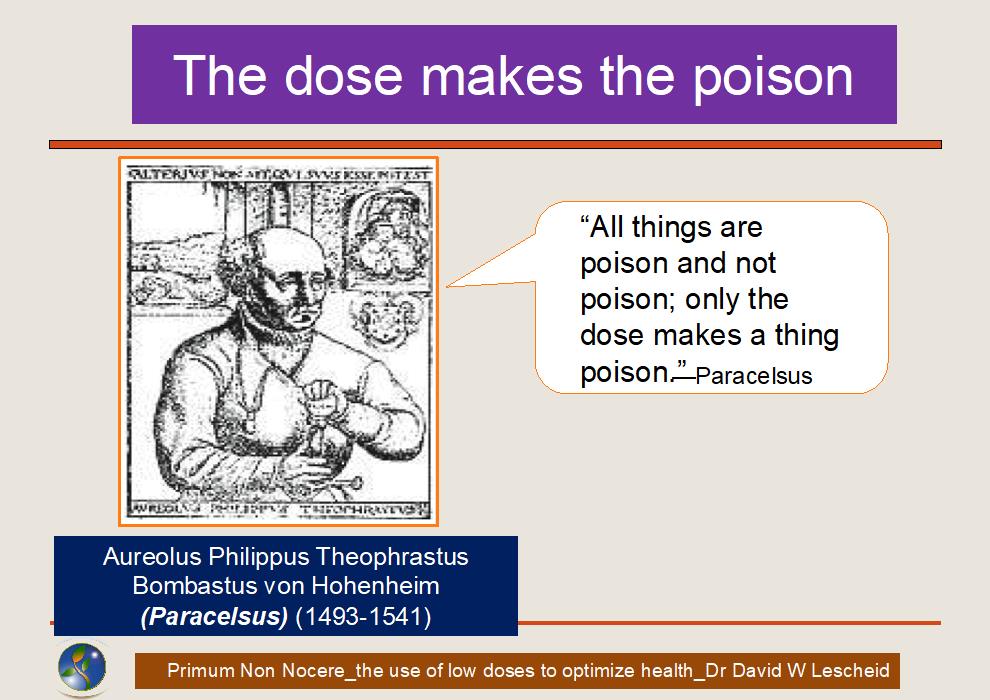 The first rule of toxicology is that the dose makes the poison. As I described with the example of water, substances that may be harmful at high dosages may be completely harmless or even beneficial at low doses. Certainly, it is best to avoid altogether certain types of chemicals such as persistent organic pollutants, or POPs, since our body stores them in fat cells as a way of protecting our vital organs. Unfortunately, avoiding POPs is extremely difficult. Not only are these chemicals widely used in pest control, crop production, and industry, but POPs also persist in our environment and in our bodies.

Fortunately, the body has myriad ways of dealing with harmful compounds, including redox-anti-oxidant enzymes that break down large harmful chemical compounds into smaller compounds that are less damaging. These secondary oxidative compounds are then transported out of the body through the organs of elimination. However, our bodies were not designed for the large number of toxins we now encounter on a daily basis. Providing support for the organs of elimination through natural compounds such as those found in adaptogenic formulations aid in toxin removal without stressing the body.1

A Scientific, Cellular Look at How our Bodies Deal with Toxins

To understand how adaptogens support our bodies in dealing with toxins, let’s take a look at detoxification on a cellular level. The phenomenon of hormesis provides a novel way of viewing the effects of toxins on the body.

The mechanism of hormesis demonstrates that high levels of toxins cause damage resulting in death of the cell and eventually the corresponding organism, whereas low levels are capable of activating transcription factors that mediate the adaptive stress response, culminating in increased lifespan, improved health, and improved stress tolerance. Mitochondrial hormesis (mitohormesis) is a significant adaptive-response signaling pathway. 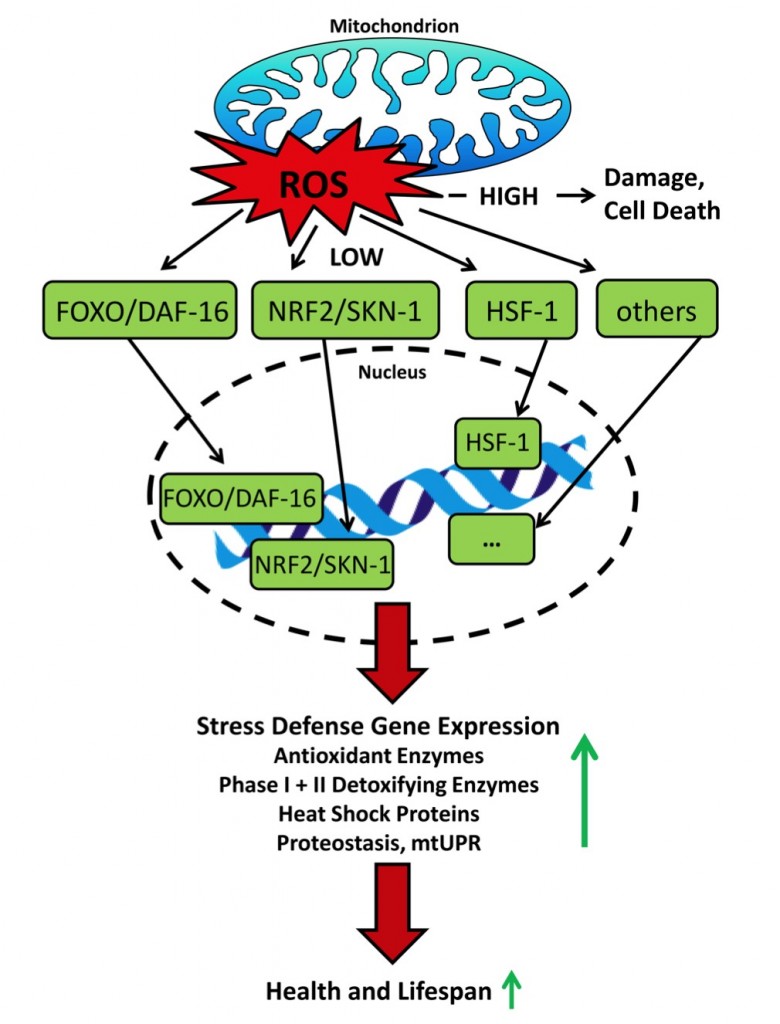 As you can see from the illustration above, low levels of toxins activate different transcription factors (shown here in green) leading to downstream effects that increase the expression of important genes known to strengthen systemic defense mechanisms, including antioxidant enzymes, phase I and phase II detoxifying enzymes, heat shock proteins that act as important chaperones, and the unfolded protein response that is a major signal controlling cellular metabolism.

This general phenomenon is called conditioning, which means the overall effect of mitohormesis is to support and prepare the mitochondrial system for future challenges by increasing the global cell defenses. The cumulative effect of this overall support for the adaptive stress response is to increase lifespan.2 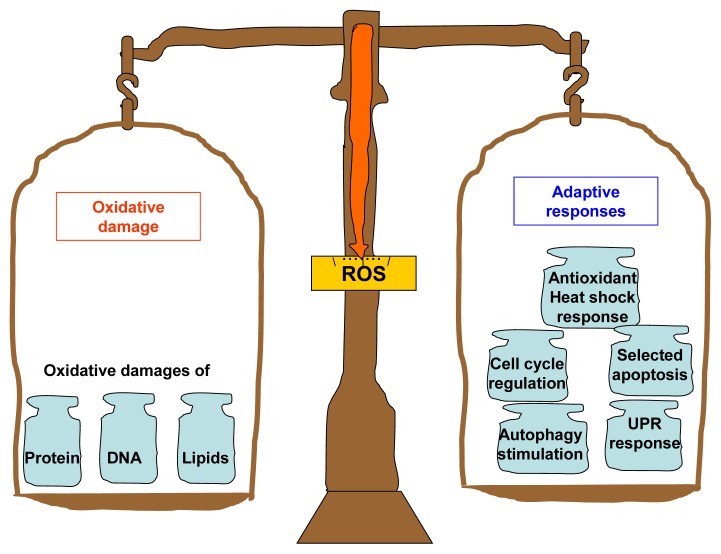 Are Low Levels of Stress Beneficial?

Interestingly, this seems to indicate that low levels of stress, instead of being harmful, may have positive effects on health and longevity.

Research suggests that the extent of the immediate hormetic effects after each individual exposure may only be moderate, but lead to biologically amplified effects that could have much larger, synergistic and pleotropic effects. The consequence of this hormetic amplification is an increase in the homeodynamic space of a living system, including increased defense capacity and a reduced load of damaged molecules.

The general effect is that hormetic strengthening of the homeodynamic space provides wider margins for metabolic fluctuation, stress tolerance, adaptation and survival. Wider margins enhance hermetic strengthening and increase flexibility and the ability to adapt. Couple this with adaptogenic formulas and you have a powerful “dynamic duo” for improving health and lifespan.

The takeaway message is that hormesis may promote healthy aging through mild and periodic, but not severe or chronic physical and mental challenges, and by the use of nutritional hormesis incorporating mild stress-inducing molecules called hormetins.

“A consequence of hormetic amplification is an increase in the homeodynamic space of a living system in terms of increased defense capacity and reduced load of damaged macromolecules. Hormetic strengthening of the homeodynamic space provides wider margins for metabolic fluctuation, stress tolerance, adaptation and survival.”4 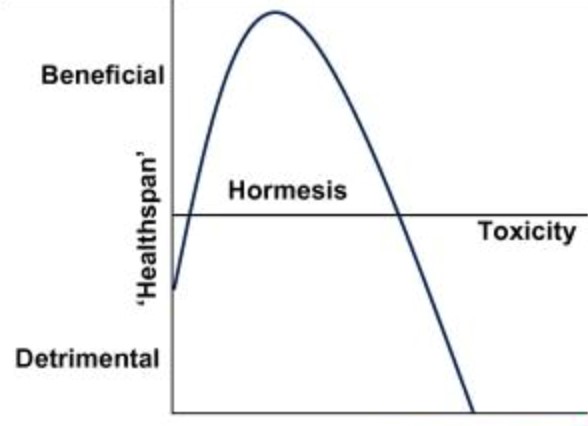 As shown on this curve above as healthspan (or lifespan), exposure to low doses of otherwise harmful agents appears to be beneficial.

How Stress Increases “Survival of the Fittest”

Herbert Spencer first used the phrase “survival of the fittest” in his Principles of Biology (1864) after reading Charles Darwin‘s On the Origin of Species. Spencer drew parallels between his own economic theories and Darwin’s biological ones: “This survival of the fittest, which I have here sought to express in mechanical terms, is that which Mr. Darwin has called ‘natural selection’, or the preservation of favored races in the struggle for life.” 5

How do we put the phenomenon of hormesis and the observations of Darwin and Spencer into practice? How do we become more “fit” in order to withstand multiple stressors and increase our chances of survival in an increasingly toxic world? 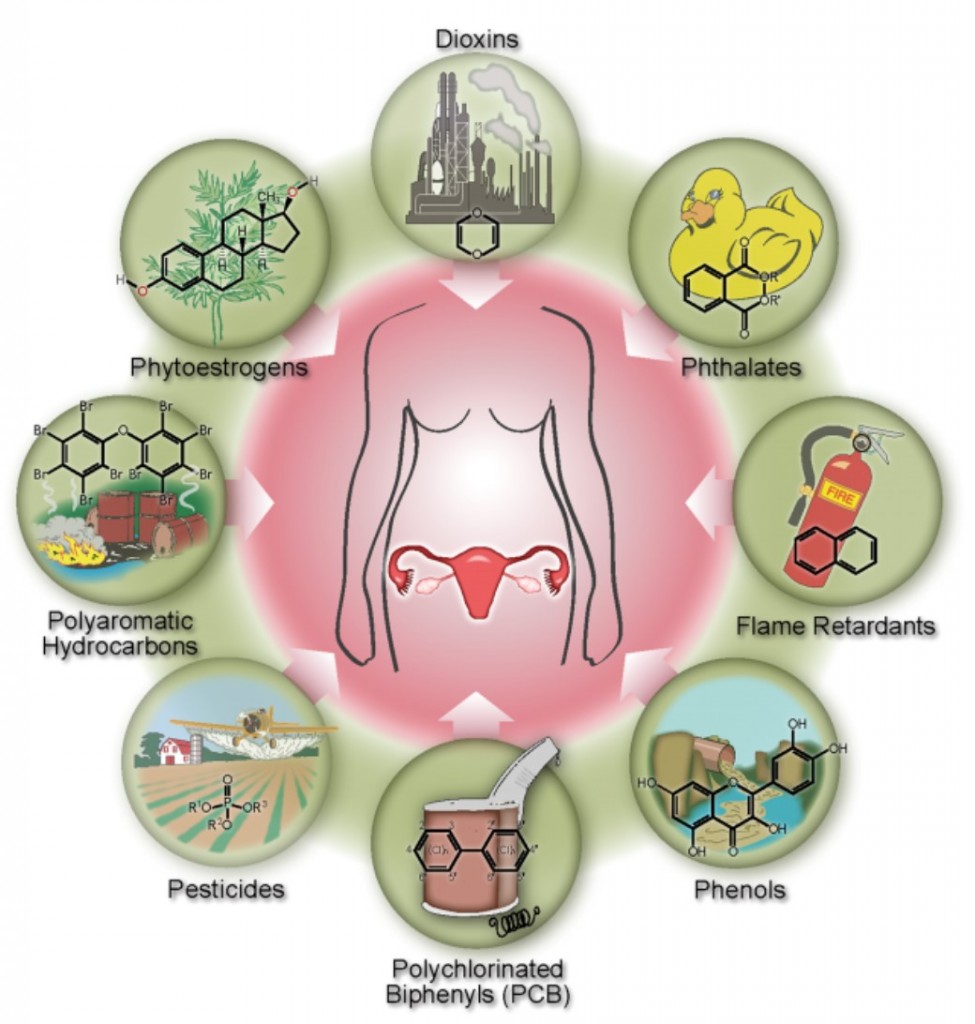 The answer is simple: Adaptogens.

Adaptogens, and particularly adaptogenic formulas, are complex and pleotropic in nature. They are the ultimate multi-taskers, enhancing our ability to respond, adapt, and efficiently remove wastes. Adaptogens are the key to long lasting, systemic overall health benefits, as opposed to a short-term “honeymoon” effect.

If the system on the whole is sick, and you only change one of the parts, it might be okay for a short period of time but will inevitably return to being the same sick system. To make a lasting change in a sick system, you have to address more than just one of the components, and substantially change the context or environment of the system. This is what adaptogens are beautifully suited to do and why they are so effective for improving our general resistance to stress.

The following illustration is an example of herbal compounding for improving digestive health, targeting diverse contributing factors while providing strengthening on all levels: 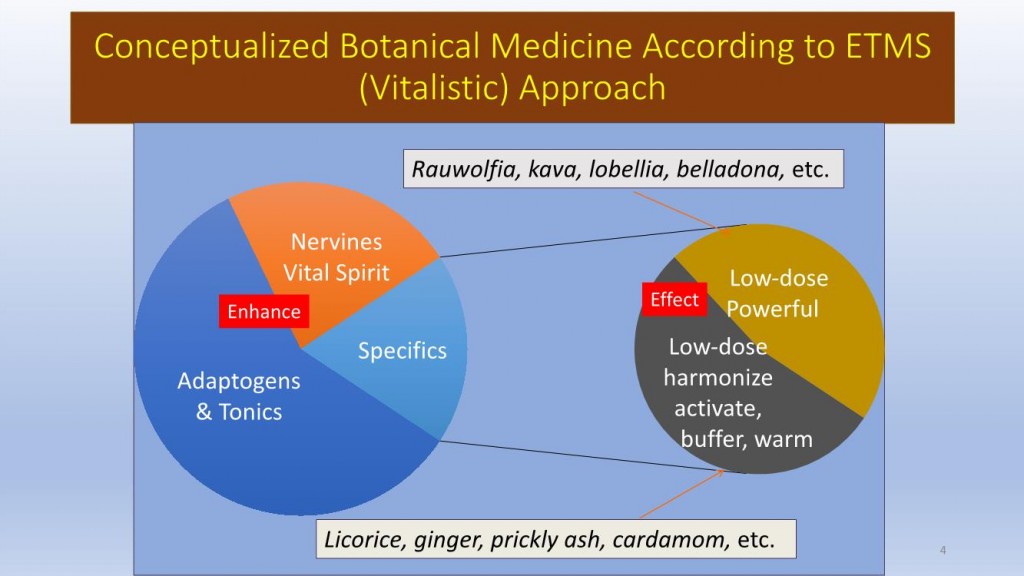 A Simple Plan for Dealing with Toxins

Your body is well designed to recognize and eliminate toxins. Your job is to minimize your exposure to toxins as much as possible, while providing your body with the support that it needs to do its cleansing and healing tasks. Consistently making healthy food and lifestyle choices goes a long way toward reducing your toxic burden.

As I mentioned earlier, radical cleansing programs often do more harm than good, and can overload and weaken the organs of elimination. Our bodies need support, not radical “housecleaning.” Providing your body with adaptogenic support gives your body what it needs to do its job efficiently.

Adaptogens have also demonstrated they can extend lifespan in flies, worms, and yeast. Adaptogens have been extensively used to improve physical and mental performance and to protect against stress. Adaptogens improve human health and lifespan, and are potentially a viable candidate to treat aging and age-related diseases in humans.6,7,8

It is unlikely that the pharmacological activity of any phytochemical is specific and associated only with one type of receptor, particularly adaptogenic compounds which affect key mediators of the adaptive stress response at intracellular and extracellular levels of communication.

Adding adaptogens to a healthy diet and lifestyle can mean the difference between optimal health and a body burdened by toxic overload. For this reason, adaptogenic formulations are the foundation of all protocols I create, both for people in good health and those suffering from illness.

"A human being is part of the whole...He experiences himself as something separated from the rest—a kind of optical delusion of his consciousness. This delusion is a prison, restricting us to our personal desires and to affection for a few persons close to us.  Our task must be to free ourselves by widening our circle of compassion to embrace all humanity and the whole of nature in its beauty." - Albert Einstein