John Coltrane (1926-1967)—saxophonist, composer, and iconic figure—is to me a saint. He has inspired me in my music and my life, and has meant so much to me that we named our son Coltrane. September 23rd is the anniversary of John Coltrane’s birth. In his honor, I want to share with you what has made him such an influential figure in my life.

I’m not alone in holding Coltrane in such high regard. In 2007, he was awarded the Pulitzer Prize Special Citation for his “masterful improvisation, supreme musicianship and iconic centrality to the history of jazz.” In 1982, the African Orthodox Church canonized him as Saint John William Coltrane, in recognition of the tremendous spiritual power of his music. Coltrane’s life wasn’t easy; in his early years he struggled with addiction to heroin. But in 1957, he had a religious experience that powerfully affected the direction of his life and his music. He quit drugs, and dedicated his life to influencing others in a positive way through his music. In the liner notes of his greatest masterpiece, A Love Supreme, Coltrane wrote: “I experienced, by the grace of God, a spiritual awakening which was to lead me to a richer, fuller, more productive life. At that time, in gratitude, I humbly asked to be given the means and privilege to make others happy through music.”

“Trane,” as many came to call him, was always striving to create a sound that no one else had produced. I believe he allowed himself to explore the vastness of spirit through music like no other human before or since. Coltrane was a visionary, and his connection to God was central to his life and expressed through his music. I feel the same calling; God is also central to my life and my work, and I am passionate about expressing my spiritual vision through my music and the healing system I have created, the Eclectic Triphasic Medical System.

In jazz music anything can happen if you remain open and free. That edge is where great art and music transpire, and I believe that is also the place where healing occurs. Constant innovation is essential for the jazz musician, which means trying to go beyond what is familiar to a place one has not previously visited. This exploration is essential for music that is healthy and vibrant. One has to be flexible, adding something new to something old, changing as conditions change—in other words, being aware of what the other musicians are playing, as well as what you are feeling in the moment. Experiment and change are the essence of jazz, along with introspection and dedication.

Listening to Coltrane express himself on his horn takes me to new places each and every time that I did not know existed. Many musicians and artists explore their inner self through their art, and then share that with us so that we can feel the center of our being. Music and art allow us to internalize to the depths of our souls.  There we gain a sense of true freedom, a dwelling place for the spiritual journey.

To me, John Coltrane was a messenger of love. During his relatively brief time on this Earth, he kept trying to reach new levels of awareness, peace, healing and spirituality. He wrote, “My music is the spiritual expression of what I am—my faith, my knowledge, my being.”

Many people could not understand his music, but they listened nonetheless, because on a deep emotional level, it spoke to them. Coltrane never simplified his music just to gain popularity. He fused together the most extensive musical imagination and spiritual exploration with the greatest technical capacity music has ever witnessed. John Coltrane spoke through his horn: “No road is an easy one, but they all go back to God.”

When Trane was asked if there was any stopping point for his experimentation he replied, “No…you just keep going all the way, as deep as you can.”

For his last album he wanted no liner notes, just the titles of songs and the names of the musicians. He stated, “At this point I don’t know what else can be said in words about what I am doing. Let the music speak for itself.”

His music was assertive, explosive, filled with tension, even pain, and ever so free, beyond the listening boundaries of even the most skilled musicians; yet filled with a love that no words can ever describe.

“You know, John Coltrane has been sort of a god to me. Seems like, in a way, he didn’t get the inspiration out of other musicians. He had it. I really didn’t understand what Coltrane was doing, but it was so exciting the thing that he was doing…” 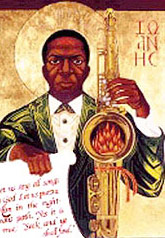 John Coltrane on his spirituality:

“I thought about this question. I answered it as best I could [at the press conference]. I felt I didn’t tell [the reporter] what I really wanted to say. He thought I was Christian. And I am by birth; my parents were and my early teachings were Christian. But as I look upon the world, I feel all men know the truth. If a man was a Christian, he could know the truth and he could not. The truth itself does not have any name on it. And each man has to find it for himself, I think. There is never any end. There are always new sounds to imagine; new feelings to get at. And always, there is the need to keep purifying these feelings and sounds so that we can really see what we’ve discovered in its pure state.

So that we can see more and more clearly what we are. In that way, we can give to those who listen for the essence, the best of what we are. But to do that at each stage, we have to keep on cleaning the mirror.”

“Over all, I think the main thing a musician would like to do is give a picture to the listener of the many wonderful things that he knows of and senses in the universe . . . That’s what I would like to do. I think that’s one of the greatest things you can do in life and we all try to do it in some way. The musician’s is through his music.”

“My goal is to live the truly religious life, and express it in my music. If you live it, when you play there’s no problem because the music is part of the whole thing. To be a musician is really something. It goes very, very deep. My music is the spiritual expression of what I am – my faith, my knowledge, my being.”

“We are free to be whatever we want to be.  I would like to be a saint.  Saints are what they are, not because their sanctity makes them admirable to others, but because the gift of sainthood makes it possible for them to admire everyone else.”

I regard John Coltrane’s music as “spirit-jazz,” fueled by the Holy Spirit. This force carried him to unparalleled levels and places of sustained creativity, energy, focus, depth, eloquence, and ultimately—heaven.

“Life is a quest to unite earth to heaven” – Donald Yance

One Reply to “Remembering John Coltrane”