In almost all cultures, bread is considered a staple food. There’s good reason for this—good bread is so nutritious that it’s possible to survive for a long time on merely bread and water. Of course, I don’t recommend a diet of bread and water, but I do believe that whole grains, including bread, are an essential part of a healthy diet.

Bread provides more than physical sustenance. We use the phrase “breaking bread together” to indicate the sharing of a meal with someone. In a spiritual and social sense, bread binds us together in our humanity and offers a sense of community. “For we many are one bread, and one body: for we are all partakers of that one bread,” (1 Corinthians 10:17). In the Jewish Passover meal, bread plays an integral role. The Jews were to eat unleavened bread during the Passover feast and then for seven days following as a celebration of the exodus from Egypt. God rained down “bread from heaven” to sustain the nation (Exodus 16:4), referring to it as “manna” (Exodus 16:31).

When made from freshly milled whole grains, by artisans, and with love, good bread feeds us in many ways, including:

The Evolution of Bread

Bread is one of the oldest prepared foods. Evidence from 30,000 years ago in Europe revealed starch residue on rocks used for pounding plants. Today, almost every society in the world sits down at the table and eats bread in some form. From the beginning, bread has provided both physical and spiritual nourishment. “The symbolism of wheat and the symbolism of bread are intertwined. Since the Neolithic period myths and rituals formed around plant life. At the time of the spread of agriculture, grains became the mainstay of making bread. People of this era observed that a grain of wheat dies but later is reborn as a spike, which is capable of providing humans sustenance. This was a great mystery to early people, and they came to revere wheat as sacred.”[1]

There are many reasons to appreciate a humble loaf of good bread. Everyone, no matter what his or her economic status, can afford to make bread. You need not be wealthy to afford bread—God made bread for both the rich and the poor. Organic wheat and other whole grains used to make bread are inexpensive, yet nutritious ingredients. Whole grains, including wheat, and specifically heirloom wheat, have the least negative impact on the environment. And last, but certainly not least, modern scientific research has validated the enormous health benefits of whole grains. I realize that the latest fad in nutrition is to blame whole grains and bread on our poor health, but this is not the truth. I believe that it’s important to take into consideration traditional use, as well as good factual science (see my two blogs addressing the truth about grains: https://www.donnieyance.com/truth-grains-part-1/; https://www.donnieyance.com/truth-grains-part-ii/). For perspective, remember that many healthful foods that have been vilified in recent years (including healthy fats, eggs, and butter) have since been exonerated. I predict the same will happen with the current trend of avoiding whole grains.

The Health Benefits Of Whole Grains

The most well known grains consumed worldwide include wheat, rice, corn, oats, barley, rye, sorghum, millet and buckwheat. Each of these grains has unique health promoting peptides and health benefits. In general, whole-grain foods are a major source of energy from carbohydrates, and provide protein, B vitamins, and minerals, as well as important disease preventive phytonutrients. A large body of scientific evidence indicates that whole grains play an important role in lowering the risk of all chronic diseases, including coronary heart disease, diabetes, and cancer, and also contribute to body weight management, gastrointestinal health, and an overall reduction in mortality. Conversely, a high intake of refined grain products appears to increase the risk of disease.2-5

All grains come in their own divinely designed preservation packaging, which we know as the bran. This exterior shell of the grain is made up of many nutrient rich layers. More importantly, it protects and preserves almost indefinitely the vital more sensitive nutrients stored within. From Biblical accounts, we know Joseph stored grain for up to fourteen years—enough to feed the entire nation of Egypt during seven years of famine. Grain found in the pyramids, buried with ancient rulers such as King Tut, has been found to be viable even thousands of years later.

Just inside the bran is the endosperm, a white starchy substance with a low level of nutrients. This is the “white flour” that makes up most of the baked goods and grain products sold today. Buried deep within the center of the endosperm is the most vital part, the germ. Although the germ is the smallest of these three components, comprising only 2½ percent of the entire kernel, it contains a high concentration of some of the most valuable nutrients. The wheat germ contains tocopherol and tocotrienols and the bran contains phytosterols, beta glucans and magnesium.6

The Truth About Gluten

In the past few years, gluten has been blamed for everything from obesity to dementia. This tough, elastic substance results when flour is mixed with water. Proteins in the wheat called glutenin and gliain are responsible for the formation of gluten. Thus, the higher the protein content of the wheat, the greater the capacity for gluten formation. Thorough kneading enhances gluten production. The fibrous network of gluten strands within the dough trap gases created by yeast fermentation, causing the bread to rise. Insufficient gluten results in the dense, heavy breads that cause many people to give up when experimenting with baking whole-wheat bread.

Although some people do have gluten allergies and must avoid all gluten containing grains, avoiding gluten has become “trendy” and many people have given up bread and grains unnecessarily. Unfortunately, many people put freshly milled organic whole grain flour in the same category with refined, white, commercial, non-organic, GMO, and rancid flour. They mistakenly blame whole grains and bread for all health problems. The truth is that many people feel better, digest better, and are able to lose weight not because they are avoiding whole food carbohydrates, but because they have eliminated refined junk foods, which generally reduces total caloric intake. In addition, when you avoid carbohydrates you often lose excess fluid that you might have been retaining, particularly in the belly. Commercial refined grains and breads are often combined with excessive salt, which causes fluid retention.

A Few More Thoughts On Bread

In addition to all of the health-promoting nutrients in whole grains and whole grain breads, they provide us with an efficient energy source. Although the body can certainly adapt and derive energy solely from fat, optimally we obtain energy from both whole-food carbohydrates and fats. In this way, the body can shift back and forth, sustaining good energy and fuel breakdown over long periods of time, and reducing the waste material produced from energy utilization, including oxidative byproducts. If the body cannot efficiently burn whole-food sources of carbohydrates, then we need to support the process with botanical and nutritional medicine instead of avoiding carbohydrates. I do not believe a ketogenic diet is good for us either short-term or long-term, nor is it good for the environment.

Although I am convinced the whole grains and breads are a healthful addition to the diet, obviously not all breads and grain products are beneficial. The best bread is made from freshly ground organic whole wheat berries—better yet are the heirloom varieties of wheat, such as Kamut (Triticum turgidum ssp. turanicum), which I like very much.  According to legend, Kamut was the wheat kernel found in the tomb of an ancient Egyptian Pharaoh, hence the nickname “King Tut’s wheat.” This delicious ancient wheat variety is organically grown, high protein, disease free, non-GMO, and rich in selenium.

I make homemade pizzas from freshly ground flour twice a week, and I especially enjoy Kamut, which I grind fresh as I do all my grains. 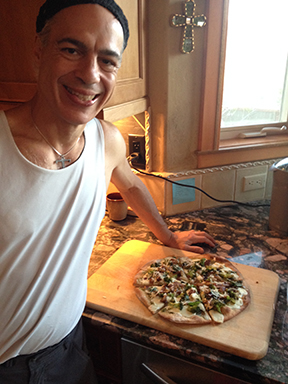 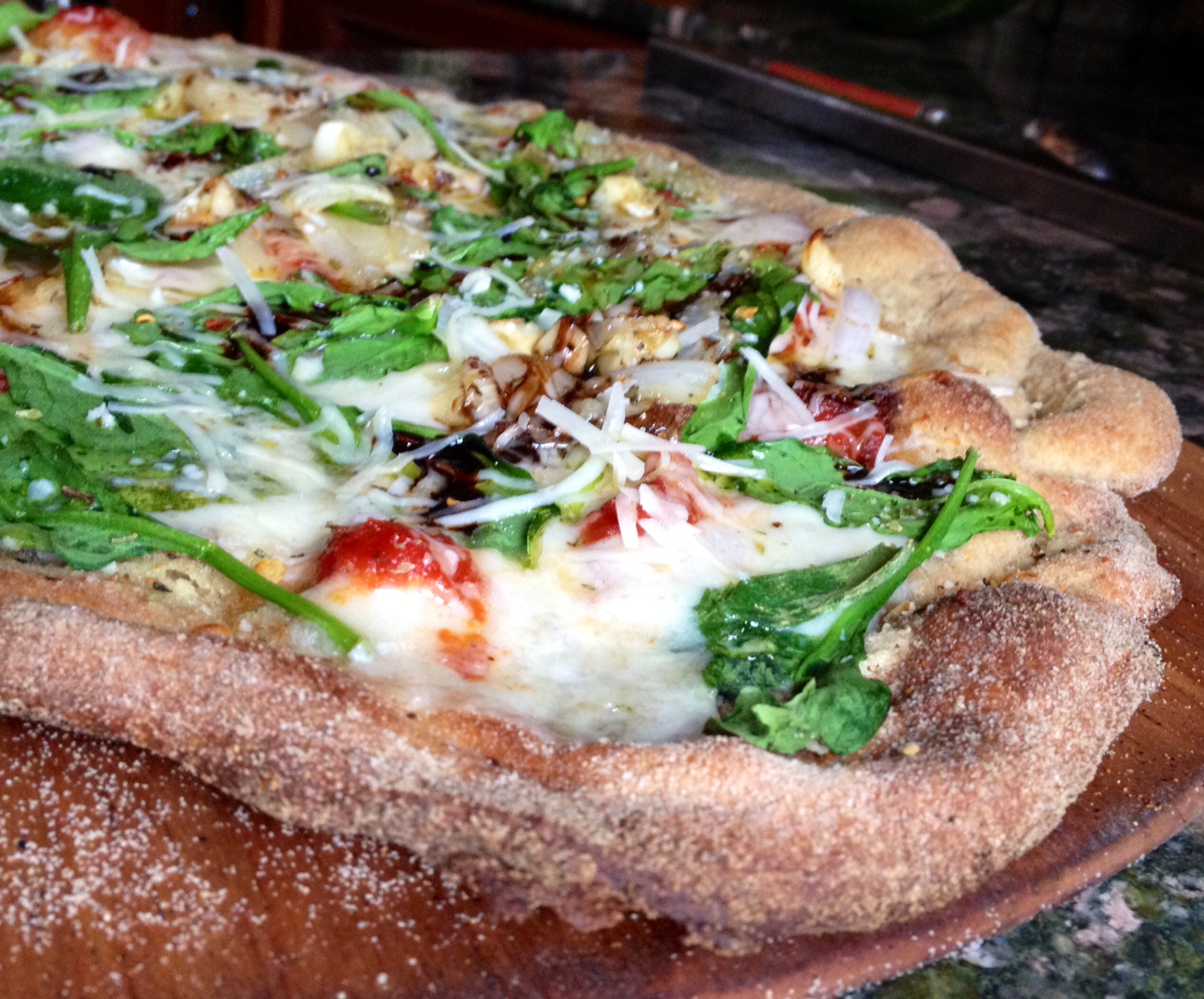 I highly recommend purchasing a grain mill and grinding your own fresh flour to protect the nutrients and prevent oxidation. Once the bran (the protective covering) has been cracked open, the inner elements are exposed to oxygen, which quickly degrades the vitamins and oils. For example, within twenty-four hours of grinding or cracking wheat, forty percent of the nutrients have oxidized. Within seventy-two hours of processing (just three days), ninety percent of the nutrients have been destroyed.

I strongly believe the healthiest diet includes whole grains, eaten in balance (not in excess) with a broad-spectrum of proteins, fats, and plenty of fruits and vegetables. Worldwide, this way of eating has been associated with the highest quality of health and longevity. Unless you have a known allergy to gluten (such as celiac disease), I recommend including whole grains and whole grain bread in your diet. I think you will find this to be health supportive in every way—physically, mentally, emotionally, and spiritually.

3 Replies to “Bread As Sustenance For Body And Soul”

“There is no certainty; there is only adventure.” - Roberto Assagioli