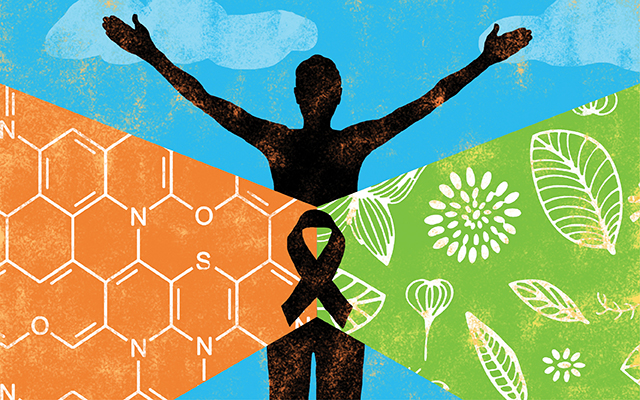 A great deal of fear surrounds the combination of botanical medicine and modern medicine that isn’t based in truth or scientific rigor, but rather on theory or hearsay. Unfortunately, that deters many patients from treatment protocols that can greatly enhance their quality of life and prolong their life as well.

There is an extensive body of research demonstrating in vitro and in vivo (animal and human) synergy between natural products and anti-cancer drugs including chemotherapy, targeted agents, and immunotherapy against primary cancer, cancer resistance, and particularly cancer stem cells.

Two of the most profound benefits of botanical compounds are 1) their ability to provide broad-spectrum protection, and 2) their multi-targeted nature. These abilities position them to have a positive effect on a multitude of pathways involved in cancer, as well as on specific targets within those pathways. Furthermore, the distribution of cancer driver genes across pathways presents a relevant case for the role of botanical compounds in targeting critical cancer therapeutic space.

The Multi-Faceted Benefits of Botanicals

Botanical compounds are a main feature of Mederi Medicine, the unitive approach I developed and practice. I often combine well-researched botanical compounds, including many common herbs and spices that have been part of traditional medicine and cuisine for centuries. These include ursolic acid (found in sage and basil), gingerols (ginger root), quercetin (onions and ginkgo leaves), carnosic acid (rosemary), resveratrol (Japanese knotweed and grape leaves), andrographolide (andrographis), and honoikiol (magnolia bark). These various compounds target pathways both distinct from and in common with cancer drugs, strengthening the potential for synergy and complementary therapeutic effectiveness.1

Besides the fact that there are multiple active synergistic compounds within all plants, each of these compounds show greater structural diversity, bioactivity, and complexity than compounds in synthetic drugs. Botanical compounds have the ability to inhibit some targets considered unsuitable for drugs, such as protein-protein interactions, and target biologically relevant space since they are mostly secondary metabolites, or signaling molecules.1

The science is clear that botanical compounds increase the cancer-relevant targetable space from a target and a pathway perspective, as well as provide additional coverage of key cancer driver genes. Given current challenges in acquired drug resistance to approved cancer drugs, the inclusion of botanical compounds in combination therapies may allow us to broaden our scope of targetable cancer-relevant pathways for therapeutic advantage.

Many botanical compounds act in a pleiotropic and non-specific manner, but more importantly, they are able to tune the reactive oxygen species (ROS) signaling to activate a survival or a pro-autophagic and pro-apoptosis mechanism, depending on the oxidative stress-responsive endowment of the targeted cell. Botanical compounds not only have the potential to counteract cancer malignancy and progression, but can also induce tumor cell necroptosis, as well as apoptosis.2 In other words, botanical compounds protect normal cells from cancer inducing damage that can initiate and promote cancer, while inducing oxidative stress to cancer cells.

The Problem of Acquired Drug Resistance

Acquired drug resistance is common with both cytotoxic chemotherapies as well as targeted therapies and immunotherapies.  The mechanisms differ and can be very complex with many moving drivers, both related and unrelated. Insight into the molecular mechanisms of resistance can include compensatory and redundant molecular signaling, target mutations acquired during treatment, increased expression of targeted proteins, inactivation of pro-apoptotic pathways, inhibition of DNA repair mechanisms, epithelial-mesenchymal transition, activation of pro-survival signaling, and upregulation of tumor cell efflux transporters.5

Using botanical compounds along with anti-cancer drugs offers a solution to this problem. This is the approach we use in Mederi Medicine, and it provides an effective protocol for both improving treatment outcome and most important, enhancing quality of life.

For drug resistance caused by mutations in drug targets or redundant cell pathways, “rational combinatorial targeted therapy” combining botanical compounds with drugs (often at a reduced dosage) provides a solution. This is accomplished within the framework of network pharmacology, which brings together systems biology, network analysis, redundancy, and consideration of all drug target effects, beyond therapeutic intention, for designing therapies.6 This is the approach that I have been practicing for over three decades.

Botanical formulations have proven to be effective not only in reducing uncomfortable symptoms, such as pain, vomiting, diarrhea, fatigue and leucopenia after surgery and chemotherapy, but also in improving survival benefits.7

In a review of studies on the sensitization of tumor cells to chemotherapy by botanical and natural compounds, the authors compiled data from 104 studies. The primary chemosensitizers were phenolic derivatives (26.9%) and flavonoids (17.3%).  Half of the articles were published from 2011 to 2015, suggesting that the use of botanical and natural compounds as chemosensitizers is a recent focus of interest.8

According to this extensive review paper, several botanical compounds belonging to diverse chemical families are potent chemosensitizers in tumor cells, enhancing the cytotoxicity of conventional drugs. These molecules usually have a pleiotropic effect on different molecular targets, acting on several cellular and molecular processes with low selectivity.9

Botanical medicine using botanical compounds along with whole plant extracts can positively influence healing at the molecular, cellular and organ system levels. Targeting multiple cancer hallmarks with non-toxic botanical compounds together with target-specific pharmaceuticals is foundational within the framework of Mederi Medicine.

Along with reduction in drug resistance, this approach can improve efficacy and reduce adverse effects. For these combinations, multiple therapeutic agents can be used, but these methods can also take advantage of poly-pharmacological characteristics of each single agent.10 The concept of working together through pharmacokinetic mechanisms, coalistic mechanisms,11 and through independent actions when used in combination is the heart of the Mederi approach. An interaction is coalisitic when two compounds interact in a biological context to form a new third compound, which has wider and more diverse capacity.

When developing a treatment approach for cancer, multiple influences must be combined into a comprehensive strategy. Instead of focusing on a single root cause, Mederi Medicine considers all of the root causes, and creates a unified multi-dimensional protocol. The foundation is the enhancement of innate self-regulation, self-organization, and robustness, and individualized recommendations are carefully built upon this foundation. We all draw from our own inner spirit for strength, courage, faith, hope and love, and together, we heal.

One Reply to “Botanical Compounds in Cancer Combination Therapies”